In this modern age of open-mindedness, we have seen in the past three decades a sharp rise in societies acceptance of the most ancient and previously forgotten techniques of exercise and relaxation that are now becoming extremely popular throughout the western world. Activities and practices such as Meditation and Yoga are now becoming the first choice for people of all ages across the planet who are seeking a more holistic approach to maintaining a healthy and balanced lifestyle.

Today we wanted to talk about a commonly overlooked practice that can be easily incorporated into your existing Yogic and Meditative routines with little to no effort which if applied correctly can help maximise the benefits of your endeavours instantaneously. These techniques or ‘rituals’ are called Mudras and for those who don’t know:

Mudra – Pronounced moo-drah derived from the Sanskrit word ‘Mudrā’ meaning to ‘seal’, ‘mark’ or ‘gesture’ and derives from the kinetic, ritualistic healing practices found rooted in both Hinduism and Buddhism. There’s a wide variety of Mudras which require movement of the entire body but the majority are performed with just the hands making them convenient to add into your Yoga.

In more explanatory terms, Mudras are a set of concise symbolic hand gestures that can be considered as an external form self-expression and communication that invokes the very essence of divine power with the hopes of achieving inner-gains. Mudras for just as long as they have been used for spiritual rebalancing they have also been a part of traditional dances most noticeable in the Indian culture.

One of the world’s most recognisable faces is unquestionably the Buddha, a simple Google image search of the Buddha will show many depictions and representations from paintings and sculptures to shrines and tapestries showing the Buddha engaged in deep meditation and nine times out of ten he will be shown performing a subtle hand Mudra. (You can click here to learn for of the five common Mudra of Buddha here.)

“Therefore, the goddess sleeping at the entrance of Brahma's door should be constantly aroused with all effort, by performing mudra thoroughly.”

After taking just a quick look at the selection of Yogic practices available for anybody to learn and implement it would appear that nine times out of ten they have been based and developed on the back of the previously perfected techniques that are detailed in the prominent and usual sources known as the ‘Gheranda Samhita’ meaning ‘Gheranda’s Collection’. The collection of texts consists of two other 17th century Sanskrit texts the ‘Hatha Yoga Pradipka’ and ‘Shiva Samhita’. The Gheranda Samhita is arguably considered the most referenced off the three texts as it split up into detailing sections that define the seven counterbalancing stages of the Yoga process. According to the Gheranda Samhita the seven steps and their result are as follows:

So what are Mudra’s and how will they benefit you?

Firstly it’s best to put its definition into context; you will have seen above that a Mudra referred to as a seal. What this means is to ‘seal’ the circuit to keep the pure & revitalising energies recirculating around the bodies complex metaphysical system that forms our spiritual structure to which our physical existence is centred around.

According to the traditional Hindu medicinal system Ayurveda, which is entirely focused on the concept of balance urges the adjustment to lifestyle, diet and the incorporation of holistic and pranayamic practices such as yoga to combat dis-ease within the physical body. Ayurveda summarised explains how human beings are an assembly of the five significant elements plus the "metaphysical self”. Part of the Veda goes on to express the notion that everything in the universe is made up of the five elements we recognise as: Earth, Wind, Fire, Water, Ether or Akash and these five elements are believed to be present in the human body and are represented as follows: 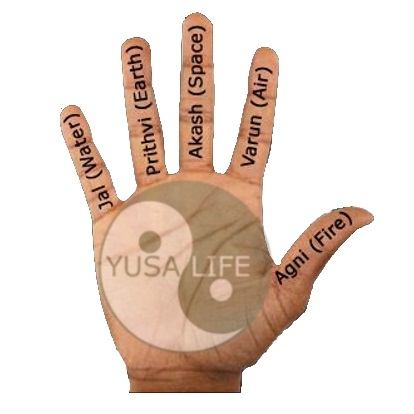 Very similar to how the chakra energy system works if not the same, when one of these internal elements becomes imbalanced, and there’s an extended period of reduced energetic flow throughout the body, spiritually, this can manifest on a physical level causing subconscious compliance to behaviours that do not support your higher self. In addition to that, the immune system can become affected and can cause ailments even dis-ease throughout the physical body.

When it’s brought to your attention, whether it be through self-realisation or some other external medium when it is you find out which element residing within you has fallen out of equilibrium the problem requires nothing strenuous nor does it need anything complex. Mudras are performed by just connecting the relevant corresponding finger to the thumb while in the instructed position to re-establish the connection and restore balance. It’s literally that simple, for the best results it’s recommended that you practice for a minimum of 25-30 minutes in a continual session, there is no necessity to maintain the same gesture for the entire time you can choreograph your routine switching the position ever 4-5 minutes.

That being said, we’d also like to point out that mudras are much deeper than as they would first appear, there are more complicated routines that have been choreographed over the many centuries since their inception that have a particular set of instructions that have their unique consequential benefits. But to be able to best cover as many bases as possible we thought it essential to start with the basics and work our way up.

We have put together a list of some Mudra’s that you yourself can apply to your current yogic and meditative practices to help you increase the energetic flow and raise your vibration.

Gyan – Possibly the most basic and well known Mudra of them all which stands to represent concentration, knowledge and emotional balance. According to Ayurveda Gyan is best practised in the morning and because of its effectiveness in aiding the control of thoughts, it’s a highly recommended mudra for anyone experiencing difficulties with mental health. Gyan is executed by simply connecting the thumb (Fire) to the tip of the index finger (air) while keeping the remaining fingers straight and could be seen as ‘air breathing life into the fire’ or equally ‘controlling the balance of air flow.

Apaan – Is a versatile mudra that holds an association with many different physically and spiritual benefits but is most often linked with the detoxification of the bodily fluids. The world’s current state of health is largely down to the integral industries of supplies do not care about it’s consumers which is why this mudra can be of so much use. As well as aiding the cleansing of fluids, Apaan would be strongly recommended for anyone who has any issues within the digestive system as it’s linked to bowel regulation. Apaan is carried out by joining the thumb (fire) to the tips of the middle and ring finger while keeping the pinkie and index fingers straight. This could be seen as fire heating up earth to prepare for a change that is brought forth through ether. (Example - sometimes when we are ill we develop a fever to sweat out the virus of which your immune system has decoded and manifested a solution.

Prana - as you may know already goes by other names such as Chi and is effectively representative of life-force, Prana for the right reason is associated with the extraordinary ability to disseminate dormant energy that builds up in the body. This mudra is perfect for re-energising and encouraging a healthy distribution of oxygen throughout the body. To maximise the benefits of the Prana mudra you’re best sat in the Padma Sana (Lotus position) or if standing in the Tada Asana (Mountain Stance). While in place, just connect the tips of your ring and little finger to your thumb while the middle and index finger remains straight. This can be seen as your inner fire (thumb), becoming grounded by the earth (ring finger) while water (little finger) transports the life-force around the body.

Prithvi – is amongst the most commonly known and practised mudra’s and according to the Ayurveda is considered one of the most important mudras in healing quite rightly so for its association with overall physical stability, emotional balance and spiritual awareness. Prithvi is extremely useful in raising vitality, strength and endurance. Those who have regular periods of sickness, disease or ailments would be highly recommended by holistic healers familiar with Ayurveda to incorporate this mudra into your prescribed practices. This is truly one of the versatile mudras as it does not specifically require a yogic or meditative stance and can be performed throughout the day while taking part in regular day to day activities. Simply take the tip of your ring finger and connect it to your thumb and concentrate on a regulating a consistent flow of breath. Prithvi is seen in the body as re-establishing equilibrium of fire and earth which sustain an ideal regenerative energetic atmosphere in the body.

Rudra – Is a lesser known mudra to the newbie practitioner but is one of the more powerful and commonly used Mudras. Rudra is identified to govern and assist with Solar Plexus Chakra activation and is excellent to centralise and ground the body. The benefits of performing Rudra are plentiful and are great for those with muscular and skeletal problems like back and neck strains. You can execute Rudra while going about your everyday business, but the Ayurveda says the benefits are best received while sat meditating in the Padma Sana. The Rudra is carried out by connecting the tips of your index and ring finger to the tip of the thumb and keeping the remaining fingers straight, focus on your breathing in a steady and controlled manner. This is seen in the body as the Fire, Earth & Air combination finding balance which is felt on a physical, mental and spiritual level.

This small set of listed mudras is by no means the complete list or does it list their full benefits because in truth to list the full list would be near in impossible. That’s right, impossible; the truth is the experience and benefits are differ from person to person, and the information we have provided is not only accurate according to the common knowledge presented in the Ayurveda but through our experience implementing them into our routines. As our knowledge and understanding develop, and the benefits show themselves to us through practice, we will cover more mudras that you yourself can start using to raise your vibration.

In our next Mudra post, we will be talking through the Buddha’s intertwine-able history with the use of mudra’s which you can see here.