As we previously mentioned in our previous post (which you can catch here), Mudras are a set of concise symbolic hand gestures that are considered an external form self-expression and communication that invokes the very essence of divine power with the hopes of achieving inner-gains. Mudras for just as long as they have been used for spiritual rebalancing can be unmistakably be linked to the Buddhist belief system that incorporate the use of meditative and yogic practices of which Mudra's are seen an essential component.

The fortunate reality for those of us here in the western world is that here although we are aware becoming more aware of the physical, mental and spiritual benefits of the antiquated eastern relaxation techniques through the age of information, the unfortunate reality remains that we're receiving only part of the information. This is partly down to two things firstly, by now you should know its no conspiracy that there is a bottleneck in the flow of information which can benefit to the people and secondly, we know from a historical standpoint that the Europeanised approach to interpreting the metaphysical has always been infamously unreliable. So with the western world's revitalised interest in looking after the body beyond the physical and the turning to eastern traditions such as meditation and yoga, we felt the need to highlight the importance of some of the overlooked and often even unmentioned factors of pranyamic practices.

Most notably the world's most infamous practitioner of the art of Mudra is the deity the world knows as the Buddha. The Buddha, who has been immortalised in sculptures that are found all over the world most notably in countries like India, China, Japan, Tibet and Korea all have the commonality that the Buddha is captured to be gesticulating just a small range of the hundreds of Mudra, which we know to exist. Unfortunately, as time has progressed, whether it be through the lack of source or a collective cultural & religious agreement to perpetuate what they’d consider an ideal image of the Buddha or very simply laze the real reason could quite probably remain speculated over forever.

What we do have left on display for the world to observe in the form of art whether it be sculptures, statues or paintings are depictions of the Buddha positioned in 5 known Mudra that we have profiled for you below. Those of you who’re just getting into Meditation and Yoga, you will find it easy to add the Buddha’s Mudra’s into your routine and for those of you new to the subject would benefit from reading our previous post ‘What Are Mudra’s”. In no particular order:

Dharmachakra has the meaning ‘Wheel of Dharma’ in Sanskrit. It’s said as per the life story of the Buddha, Dharmachakra holds great significance as it was the Mudra of choice as he delivered his first sermon to his following after his illumination at Sarnath. The gesture is seen as representing the setting into motion of the Wheel of the teaching of the Dharma. Dharma is the doctrine of Buddhism Orthodox which was advocated by the Buddha that teaches of the universal truths common to all individuals at all times. In opinion, Buddhism has become so popular in the west because of the focus required of the reader is to look internally.

To perform this Mudra assume the Pada Asana position and connect the thumbs of each hand to the respective index finger forming twice circles with each hand, now raise both hands towards the solar plexus and place your hands as pictured below keeping the remaining fingers straight. Symbolically, the Buddha has his hands held in front of the heart and solar plexus, symbolizing the importance of operating out of the infinite heart and by holding the Dharmachakra mudra you’re able to utilise the hearts energy to bring about your transition into enlightenment. 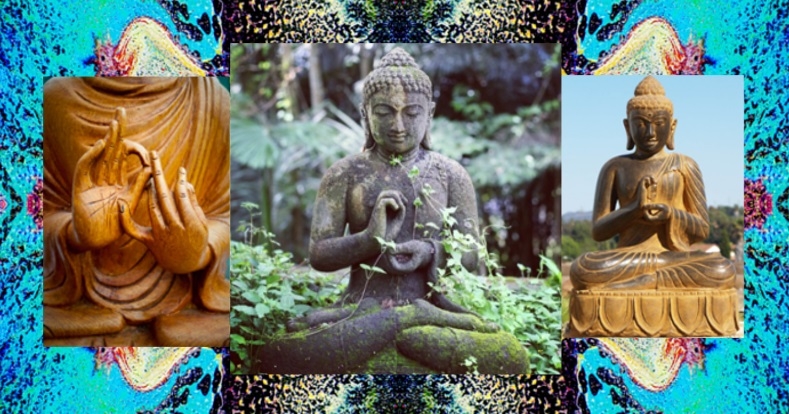 Varada in Sanskrit has no one set meaning and more modern times has been adopted as a name, it holds the meaning of charity, good will, compassion and sincerity. As per the interpretations, this mudra is said to represent the accomplishment of the Buddhas desire to dedicate himself to the uplifting of humanity. To perform the Varada takes a combination of two Mudra, first you raise your left-hand fingers straightened with the palms facing outwards (Verada) while you right arm hangs naturally by the side of body again the palm facing outwards with the fingers flat (Abhaya).

Buddhism will teach us that each of the straightened fingers hold a representation for the attainable human attributes could be considered perfect: Generosity, Morality, Patience, Effort & Meditative Concentration.

Ratnasambhava is connected to Varada and is depicted performing the Mudra for the purpose of transforming the delusion of pride into wisdom and is considered an essential part of the process. 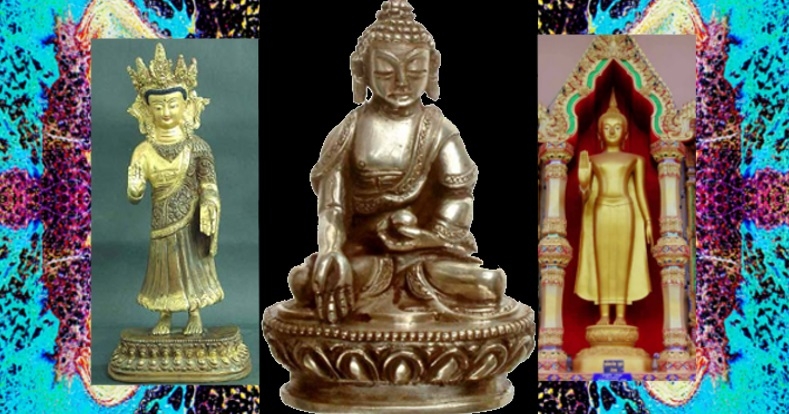 Abhaya in the Sanskrit language means fearlessness, so the Mudra stands to reduce the resonance of fearful thoughts and promotes protection. While sat upright in Padma Asana, raise your right-hand palm facing ahead of you fingers straight to shoulder level with the arm at a crook, your left arm should be left free while the forearm rests on your lap. In particular parts of the world, specifically in Thailand, this Murda is also associated to famed artworks called ‘The Walking Buddha.'

We know based on the studies of the human use of body language that peoples of civilisations that predate the southern East Asians who popularised mudras as we know them today, most probably used such gestures to communicate a sign of good intentions or coming in peace.

Abhaya is adopted or associated to Amoghasiddhi. He is also the Lord of Karma in the Buddhist belief system. Amoghasiddhi helps in overpowering the delusion of distrust. By using the Abhaya mudra, the delusion of jealousy is transformed into the wisdom of achievement. 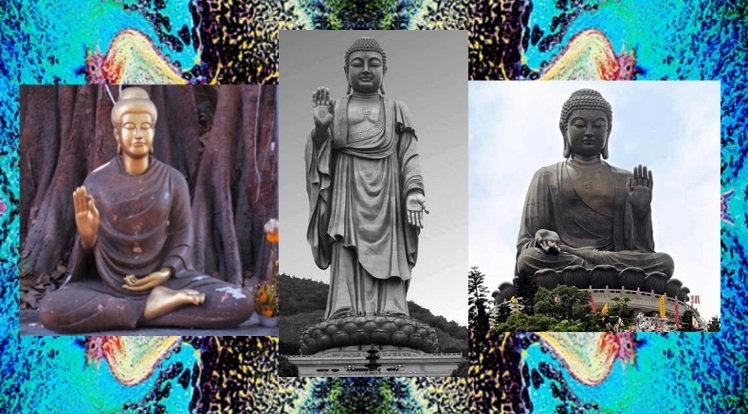 Bhumisprasha in Sanskrit means ‘Touching Earth’ representative of course what we all call today grounding. The reason this simple Mudra has so much esteem is as per the life story of the Buddha it was this Mudra he performed to summon Sthavara the goddess of the earth to bear witness to his enlightenment. All you need to do is while in the Padma-asana, allow your right arm to fall naturally and let your straightened fingertips connect with the ground. Leave your left arm comfortably over the lap with the palm facing up.

With the purpose of the mudra to reconnect to the healing frequencies of mother earth, the benefits of this mudra are magnified by performing it out in nature where you really can ground yourself.

Bhumisprahsa is linked to Akshobhya and is associated to assisting with transforming the shroud of anger into wisdom and so practicing this mudra would help dissolve inner anger or at least bring it to the surface to allow the conscious mind to process it. 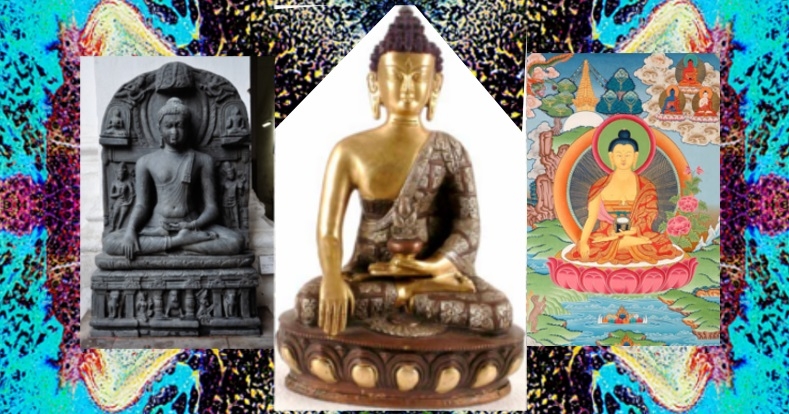 Dhyana carries the meaning of meditation, concentration, stillness and the movement towards a spiritual completion. It has so much meaning especially to those who follow Buddhism and Hinduism because it's said this is the mudra assumed by the Buddha underneath the pipal tree before his Enlightenment. Symbolically, it represents the perfect balance of mind-body-spirit harmony that may explain why yogis incorporate this mudra into their meditative exercises.

This Mudra can be performed with just one hand, but we recommend using both as it physically connects the circuit so to speak. Just place your open-palmed right hand over the left hand with all fingers extended. Place the hands on the lap in line with your stomach resting your forearms on your thighs.

If you opt to perform this mudra with just one hand, it's recommended to use the left hand that represents the female aspect of wisdom that we know to be more creative and free flowing than the linear masculine right side. In this hand to enhance the good energy flow place your crystals, sacred texts or artifacts of worship in your left hand while you meditate.

Amitabha is associated to Dhaya and its said that one who meditates with the Mudra of Dhaya is aided in the shattering the illusion of attachment. 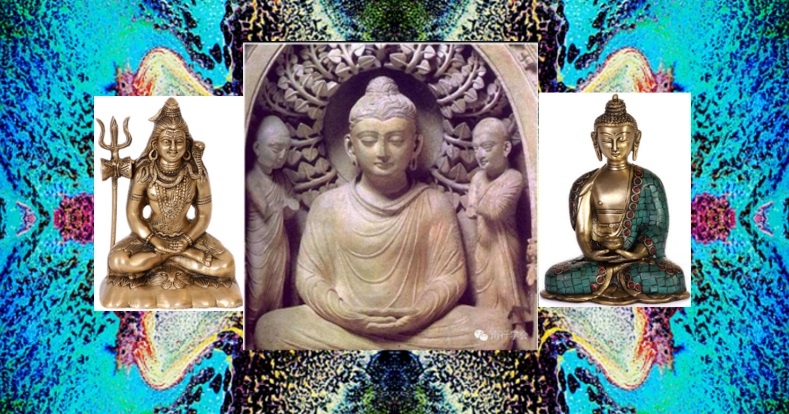 Really and truly, throughout time, the Buddha is not the only figure we know who's credited for using Mudra.Once the understanding has been met that the body has an inner flow of energy similar to the very electrical circuits that power you home, every single position and gesture that you have performed with your physical body could be seen as a type of mudra. Each physical action that we perform has a symbolic meaning that represents the current physical/mental state that over time we know to create patterns. These patterns or characteristics contribute to what we call our personality, so it could be said that every physical active we carry out is an expression of our inner nature

The secret to receiving back a frequency desired whether be for peace, health or safety is the deliberate and intentional choreography of the body parts. The art of Mudra’s can be seen and has been defined as bringing the physical and spiritual body into alignment and harmony with the cosmic and unseen forces of the universe.

Thus, our every movement is an expression of our inner nature, the ritualistic repetition of mudras allow us to become more attentive of spiritual energy. In learning the art of Mudra, we learn to breakdown thoughts and actions to their simplest form so that life can be processed as a rhythmic flow of energy and understanding. Our whole being can then become a mudra, a gesture of life within, reflecting into our external life.