Why you should censor and limit your exposure to the television.

There is no doubt that in spiritual warfare “they “ don’t play fair, and after thousands of years with the primary weapon of choice being religion and economic manipulation came the digital boom that saw the creation of the infamous television set. Since the 1970’s the TV has become the main weapon of mass distraction tightening its grip and increasing its influence on the collective conscious. In the Western world, 95% of the population watch television for at least two hours per day and has become some people’s favourite ‘activity’. It is an actual reality that by the time the average westerner has reached the age of 60, he or she will have watched between 9 and 10 years’ worth of television.

Most people who watch television often say they find it to be a relaxing hobby, but fail to observe the activity for what it is or the effects that it can have on the brain, the mind and the ability as a master creator. You will find that the more the TV screen remains the focus of your attention, the more your thought activity becomes suspended and infiltrated. For long periods, your consciousness can quickly become numb from watching various shows, encouraging little to no thought processing whatsoever, ultimately serving as an escape mechanism from reality.

Imagine what impact this has on your life. Television promotes a state similar to hypnosis where one is left very vulnerable after watching for just 12 to 15 minutes. Most of the content on television is controlled by those who are entirely controlled by the ego. The hidden agenda of the television then takes control of you by putting you to sleep. Advertisements and programs are intentionally set in accordance with the time it takes for your brain to enter this hypnotic state. This is why it's associated with the manipulation of public opinion. Politicians, special interest groups and advertisers know this and will pay millions to catch you in this receptive state of unawareness. They want their ideas to become 'your ideas', most often with success!

So how does the Television do this?

Apparently those that are behind these large television networks know something that the general public don’t, and that is the hypersensitivity of the brain in altered states of consciousness. The reason TV has been so successful in influencing the mass collective sentiment is because the TV’s output is working at the frequency of Alpha, which is around 8 to 12 cycles per second.

With the modern day capabilities of observing and recording the activity of the brain with technology, science has identified that the human brain typically ranges through a variety of frequency patterns during your day-to-day life. 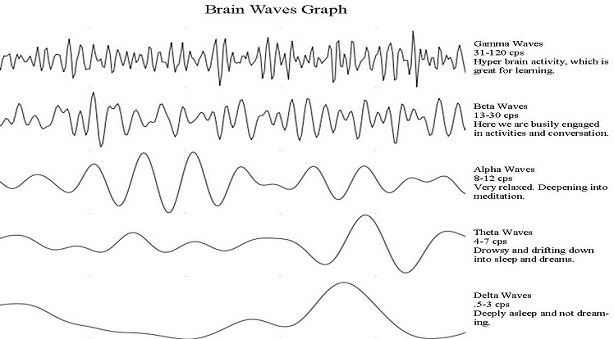 · Beta - ‘Busily Engaged in Thought Analysis’ When in conversation responding, analysing and so on

· Gamma -‘God and Man Manifesting All’ – Optimum state for learning.

Above are the five prime brainwave states that are responsible for altered states of consciousness. Each brainwave state has its own set of characteristics that make them ideal for different tasks that we take on in our day to day lives from retaining information, problem-solving and creative thinking and each of them occurs in a particular frequency range that can be scientifically measured in cycles per second (Hz). You can learn more about the different brainwave characteristics in the YUSA Guide to Balance: Mind Body Spirit but today's focus is on the Alpha wave.

As you can see from above, Alpha waves are defined as very relaxed and deepening into mediation. In actuality Alpha waves stand for ‘Almost Lulled; Present, Happy, Aware’ and most commonly occur when one is calm and relaxed, yet mentally alert. These brainwaves are also present during daydreaming, energy healing and as mentioned meditation.

Adjusting the brain into an alpha state, you can dramatically improve the quality of your life alongside improving your ability to learn. An alpha state will significantly reduce your stress and anxiety levels as well as bring you to a state of peak performance and mental processing. The alpha state is also known to enhance your immune system and allows you to think divergently, encouraging your ideas and physical manifestations to become more creatively active.

While you’re in the Alpha Zone the left and right sides of your brain are in alignment, and it is possible to reprogram your mind like a computer as there is a bridge between the conscious and subconscious mind. Why is this important? What if you could more easily overcome bad habits such as smoking or snacking? What if you could raise your IQ, cultivate a positive wealthy mindset or awaken your mind’s natural healing capacities?

Or, what if you’re completely submitting this power to the television? As we already mentioned advertisements and programs are intentionally set in accordance with the time it takes for your brain to enter this meditative state.

So without the watcher even being aware that this connection is forming on the level of mind, after becoming victim to the advertisements, your subconscious is now being bombarded with illusions that also give rise to inner emotions matched with visualisations. This is how the seeds of unsupportive beliefs are planted and can grow into behavioural habits like consumerism.

So although your thoughts may seem still, and that not a lot of thought is being generated when you’re sitting in front of the television, they are however highly engaged in the activity of the television show, linking up with the TV version of the collective mind and thinking its thoughts. Your mind is inactive only in the sense that it is not producing thoughts. It is, however, absorbing the continuous stream of thoughts and images that come through the box with lights it’s no coincidence the shows that are on the television are even named ‘programs’.

Imagine the benefits you could receive in life if you used the time you watched television to work and reprogram yourself toward enhancing your reality. The conditioning that TV encourages can construct false personality layers, programming you to believe that something is deadly true, idolising others while being open to fear-based stories. These layers contribute to the construction of the ego, directing you toward wanting more and more content because you have been unconsciously programmed to buy into corporations.

To realise the true self, you have to de-program and remove the layers on top of your mind and heart. Television is just a distraction and does not serve your best interests regarding growth.

Now that you’re more aware of the metaphysical attacks launched on your subconscious every time you sit down to watch the television, maybe you’ll be more selective about the type of ‘programs’ you’re watching. YUSA believe and promote the fact that life is all about balance, and the fact remains regardless of how bad the television has been it does have the ability to change people’s lives and open their minds and hearts as well as rapidly increasing the rate information is spread. For example documentaries such as Thrive, Cowspiracy and Earthlings to name a few. It would be wise to consider how supportive to your life the television programs you‘re watching are.

Many of you after reading this, if not already will be realising that the TV is obstructing you from your true self. If you go ahead and ditch the TV you’re going to have some extra time on your hands and to help fill it, we have presented below a Alpha Wave creative meditation straight out of the YUSA Guide to Balance: Mind Body Spirit which will with practice will empower yourself with the same programming abilities that the TV has over you only you decide what you create and manifest.

Whether you’re beginner or advanced meditator, with the assistance of brainwave entrainment technology you can gently lower your brainwaves to a focused alpha level while remaining in complete thought awareness. In this altered state of consciousness, you will gain access to your subconscious mind, intuition and other great powers hidden within. Simply by working with and embracing brainwave entrainment, visualisation and your mind the results that can be brought forward are highly encouraging. More benefits include stress relief, enhanced creativity and intuition alongside accelerated physical and emotional healing. It is advised you explore the audio tracks available on the YUSA YouTube channel.

· Start by sitting upright, back straight and listening to the recommended alpha frequency audio (remember to use headphones).

· Get comfortable with breathing and the vibrations of the audio. Practice inhaling, holding the breath, then exhaling for four seconds, moving on to seven seconds after some time.

· Continue to focus on your breathing, if unsolicited thoughts pop up, let it play out whilst returning your focus back to breathing.

· After 15 to 25 minutes of stillness, you will be in the alpha state of mind. You will start to feel very relaxed, and your eyes will be heavy.

· Now, tilt your head upward about 20 degrees. Project a mental screen outward, roughly two metres in front of you at this angle. Now, once comfortable at this angle, you can start to project images, scenarios and events that you want to create onto this mental screen. Breathe in deeply through the nose whilst making vivid mental pictures of your scenario in the mid-brow forehead region (third eye). Repeat this for a short while.

This is the process of creative visualisation. It is important that you project your scenarios and images in high definition and colour. It's even more important you project scenarios with the belief they have already happened! Feel the burning desire in your heart-space and intense gratitude for receiving your desires at such speed! You can practice this for as long as you would like.

Remember to skip two days per week for brainwave recovery and stabilisation. The more you start to detoxify your pineal gland, the more it begins to visualise colour images on the mental screen. The mind is the watchman of the heart; it is what directs your focus in a laser beam fashion. The heart is the great gas pedal of empowerment; you must learn to balance both to achieve your dreams, goals and desires.

Believe. Act as if it has already happened. Live like you already have it. It’s coming; it’s a done deal.